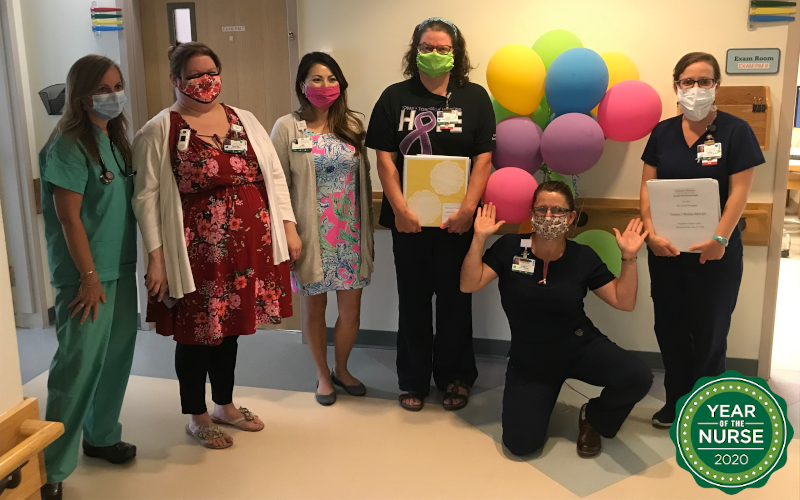 Two nurses at the FitzPatrick Cancer Center have been honored with Leadership Excellence and Development (LEAD) awards as part of their dedication to improving the lives of their patients.

Colleagues gathered for a surprise ceremony in the FCC for Rene Cooper, BSN, RN, OCN and Nora Mockus, BSN, RN. Both nurses are veterans of the LEAD program at CVPH. This is Cooper’s third time through and it is Mockus’ second.

“It was a little easier the second time around, because I knew what it was about,” Mockus admitted. “But still, a lot of work went into it. And, it wasn’t until putting it together that I realized I had done a lot over the last 2 years.”

Cooper echoed that sentiment and pointed out that while going for LEAD fit with her role in oral chemotherapy, there is a lot that goes into the achievement.

“It’s hard work, it’s dedication. It’s documenting what you do and sharing with others. You’re learning as you teach others, and I just really enjoy it,” she said.

Cooper and Mockus are among 42 nurses at CVPH who have been recognized for this accomplishment over the past two years. Previous recipients this year include Wendy Neyland (Ambulatory Surgery Center), Joni-Jill Tobrocke (Renal Services), Travis Larche (Progressive Care) and Emily Reding (Intensive Care Unit). LEAD recipients apply for the status every two years. It’s one of several ways members of the nursing team at CVPH further their professional development.

Learning and growing have always been a critical part of being a nurse. Two centuries ago, the mother of modern nursing, Florence Nightingale called the profession “a progressive art such that to stand still is to go backwards.” In the Year of the Nurse, as CVPH joins the world in paying tribute to everything Nightingale stood for, Mockus and Cooper understand why it is important to never stop learning.

“I thrive on learning. The more I can learn, the better I am with what I do,” Cooper commented. “In health care, everything changes so quickly. Whether it’s protocols and procedures, medications or new treatment plans, you just have to stay on it. And, I think it’s part of my responsibility as a nurse. My number one thing is to advocate for my patients. Being educated plays a big role in that.”

One example the proud mother of two gives is when patients ask her about medications they see advertised on television. She recognizes that she needs to be ready to answer those questions and, in some cases, suggest them to the physician. Talking to patients is a big part of the job. Cooper spends a chunk of every day calling to check in on anything from medications to nutrition and making sure each patient can get to the next appointment. Sometimes, it’s also about just lending an ear to help the patient through tough times.

“We’re allowed to walk with these people during a very scary time, and they allow us to care for them,” Cooper said. “I think that’s just amazing. It’s the relationships with the patients and the families that are just unbelievable.”

Through Cooper’s work, significant improvements have been made in oral chemotherapy at the cancer center. Originally at approximately 30 patients, she now works with about 140 patients to make sure they get the medications they need. Cooper developed the operating procedures for the program and spearheaded the creation of a tracking system to ensure patients are getting the medications they need.

“We are very proud of Rene for demonstrating OWN IT by spearheading the oral chemotherapy management program,” Regional Oncology Services Director at the Fitzpatrick Cancer Center Lan Pratt, MBA, BSRT (T) said. “She plays an integral role in ensuring that patients under oral chemo treatment are safely monitored and are following appropriate regiments.”

Mockus is renowned for her ability to build a trusting relationship with her patients. She is there when they are getting the chemo treatments and understands how much making a connection can mean to the patients who, in many cases, are going through the scariest times of their lives.

“You have moments with patients where you’re able to comfort them and speak with experience. I think that helps when they’re going through so much,” Mockus offered.

Part of her job also includes making observations. And that critical skill was a major part of her LEAD work that benefited her patients and the hospital. Mockus regularly works with port kits and noticed that there were some things in those kits that were not being used regularly. So she got to work with materials management and the Intensive Care Unit director to see what changes could be made. The result: a more efficient, cost-saving practice.

“Nora played an important role in identifying an opportunity to eliminate waste and cut costs,” Pratt noted. “Due to her OWN IT attitude, we began the process of revamping the port kits so that we did not purchase items that went unused and were therefore simply thrown out.”

For Mockus and Cooper, the connection extends beyond their daily work at the cancer center. They are close friends who love to travel. In fact, Cooper went on her first cruise as part of Mockus’ wedding. Seeing all 50 states is a dream that Cooper is chasing. She is already about halfway there and is excited to get back on the road again when the pandemic eases. Yellowstone National Park is high on the list.

Mockus looks forward to getting back on the stage and performing for audiences. She is on the board for a local theater company. And while Mockus says she’s not much of a dancer, she admits, “I’ve been known to show some moves.”

Both nurses agree there’s no dancing around the joy of seeing a patient through the entire process, from diagnosis to defeating cancer.

“I like to hear the stories of survivors,” Cooper said with a big smile. “You build that relationship. Then, 5 years later, you see them and they’re out in the community and they remember who you are. It’s just a special connection. And, I think the survivors really speak volumes for us and what we do.”

“I just love what I do every day,” Cooper continued. “I love being a nurse, I love caring for people, and I love learning about what I need to do to create change and to help change happen.”