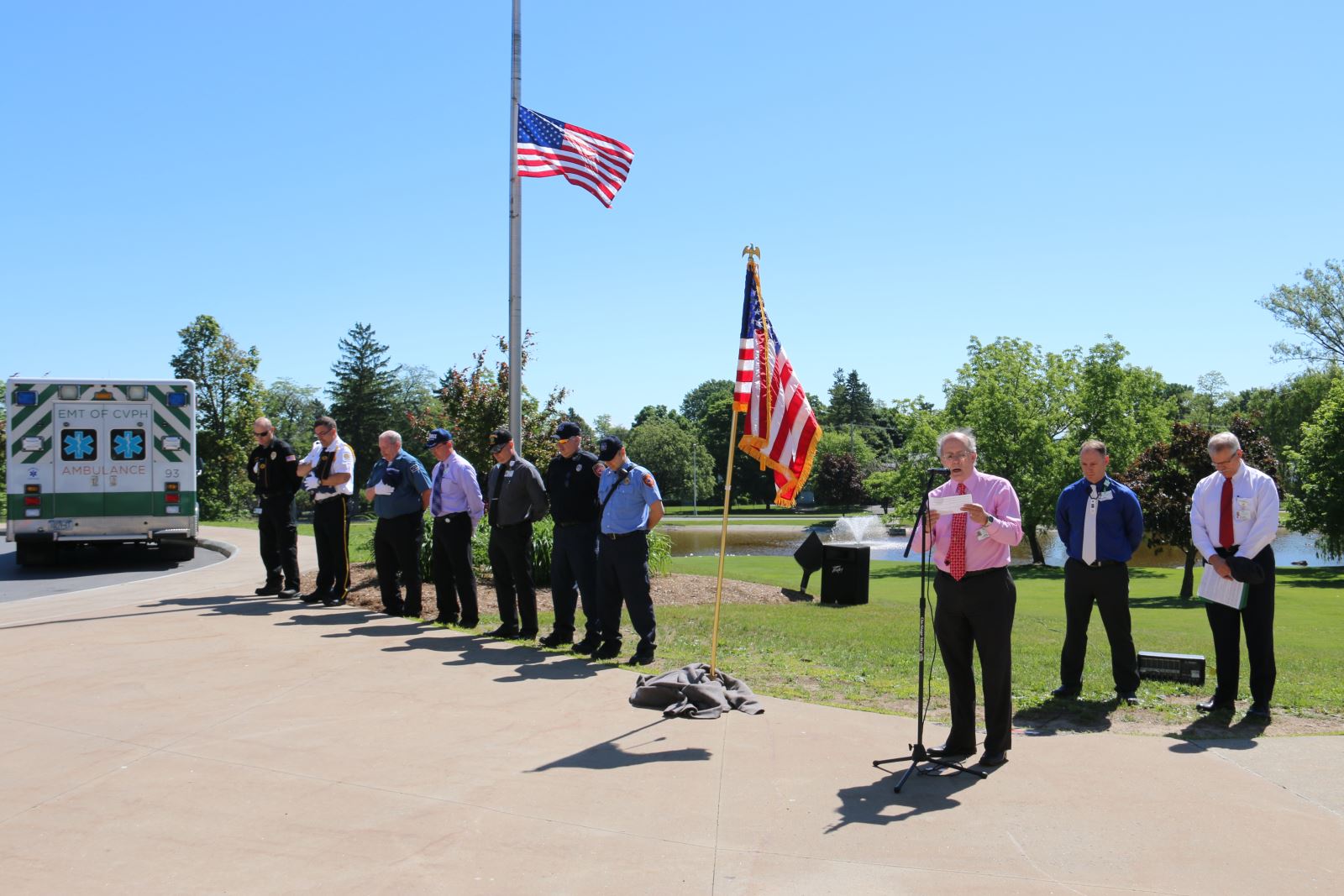 It’s a little before 10 a.m. on June 14. Residents of the CVPH Skilled Nursing Facility are gathered around the flag pole on the front lawn of the hospital taking their rightful place in the front row to witness what will be CVPH’s first annual Flag Retirement Ceremony.  After all, it was their idea.  Retired Air Force Veteran Ken Thayer, RN, explains to the audience that the ceremony is taking place because a resident asked, “What does CVPH do for Flag Day?”

It’s a picture-perfect day – the sky is bright blue and a good breeze provides Old Glory the opportunity to show its colors. A truck from the Plattsburgh Fire Department is parked near the podium and EMT of CVPH is represented too – a show of respect.

Retired Navy Chief Joe Patnode from our Facilities team, along with Ken, Retired Army Captain Daniel Lee, RN, and Retired Navy Captain Kent Hall, MD planned the event with an eye on honoring the tradition of retiring the flag while paying tribute to the men and women who serve or have served their country.  They were prompted by a sincere question from a proud veteran and this event would hopefully make him proud. It surprises no one that these men, who served their country and now serve their community, would gladly plan an event such as this.

More employees and visitors gather near the flag. Ken’s opening comments are part of a script used over and over in ceremonies just like this one.  “Just a simple piece of colored cloth, sewn together in a red, white and blue design.  A piece of cloth that of itself does nothing more than hang or blow in the wind.  But to many thousands of people throughout our nation’s glorious history, it has stood tall, standing as a monument of Freedom, for all Americans.  Men and woman have given their lives for it, fought for it, cried for it, and revered it as a symbol for the greatest country on earth.”

CVPH Interfaith Chaplain Robert Basom offers an opening prayer. Together, we recite the Pledge of Allegiance.

Army Veteran Jason Laundry, EMT and Marine Gunnery Sargeant Dale Wells, AEMT lowers the flag, folds it and presents it to Joe. The new flag is then handed to Retired Airforce Technical Sergeant Kent Faus of Security and Lee by Airforce Veteran Roger James, Biomedical Engineer.  This exchange is done with care, precision and respect as in thousands of ceremonies before.

This is a particularly poignant event given the horrific events in Orlando Florida, just a few days before.  A moment of silence is held at the conclusion of the ceremony and new flag is hung at half-mast.

This simple ceremony offers us a few minutes to reflect on national pride, the freedoms that come with being an American and the sacrifices of those who have defended them.  Ceremony concluded, the crowd disperses to carry on with the day.  The residents in front row, able to sit a while longer to enjoy the moment, beams with pride.