Emergency Nurse Goes Above and Beyond for Patient, Family

on Thursday, February 25, 2021 in Nursing, DAISY Award Winners by CVPH 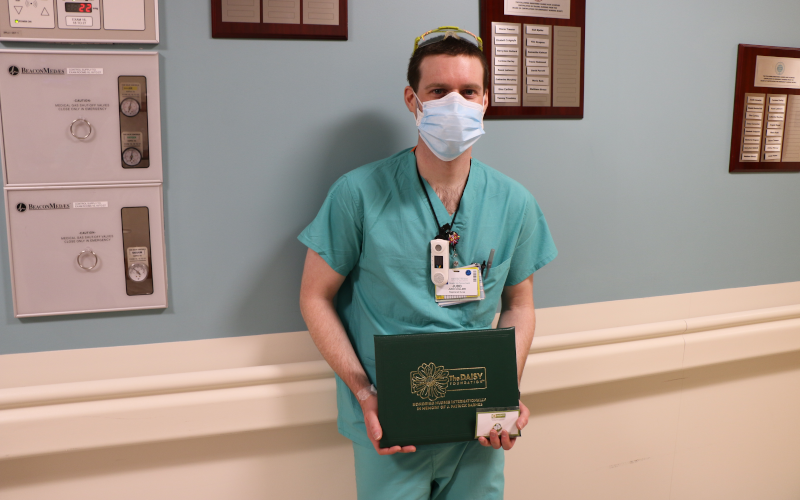 A potentially scary trip to the Emergency Department for a baby boy and his family was much easier to bear thanks to CVPH’s tenth DAISY Award winner, Judd Collier, RN. Judd was surprised with the award during a ceremony in the ED.

Working as a nurse in any area of the hospital can bring extremely busy shifts. That was exactly the case when Paige LaDuke came to the hospital with her infant son and husband. Judd had just joined the Emergency Department team from the Progressive Care unit last August and was in the middle of orientation at the time. He already had a lot of patients that he was caring for that night when he came across the LaDukes.

In her nomination entry, Paige LaDuke noted that Judd jumped right in to start helping, despite facing a large workload already. Currently, only one parent or guardian at a time can be with a pediatric patient as a support person in the ED. But at the time of this visit, COVID-19 cases were still relatively low and limited visitation was allowed in the Emergency Department, including both parents. However, as LaDuke and her son stayed in the ED, her husband had to wait outside in their truck due to limited space. Judd immediately went to work to find a room so the entire family could be together comfortably while they waited for their young son to be discharged. That was just the beginning.

“Judd helped us get discharged after looking for a specific piece of equipment that we needed,” LaDuke noted in her nomination. “He kept close communication with the doctor. He kept updating us on our care (and) was also fantastic with my infant son.”

That care really stood out to the family in the midst of what could have been a frightening time.

“He did everything possible to make sure we were comfortable on a very busy night in the ER,” LaDuke remembered. “He had so much on his plate, and despite the patient load and being on orientation, he still showed heart and compassion, two very strong qualities to have as an RN.”

Gail Bjelko, BSN, RN, TCRN, who is the Emergency Department Director, said that level of care is something patients can always expect from Judd, who started as a Clinical Assistant at CVPH in 2017.

“He is a hard working employee who produces a tangible, positive impact on his patients and his colleagues. He stays focused on his work and always puts the patient at the center of his care.”

And Bjelko points out Judd has an easy time getting smiles out of those in his care as well as his co-workers.

“Judd is a very kind and compassionate person. He has an infectious personality that makes it easy to like him,” she said.

Judd was presented with a certificate commending him as an extraordinary nurse. He, like all honorees, also received a DAISY Award pin and a beautiful and meaningful sculpture called “A Healer’s Touch,” which is hand-carved by artists of the Shona Tribe in Zimbabwe.

The award is part of the DAISY Foundation’s mission to recognize the extraordinary, compassionate nursing care they provide patients and families every day. The DAISY Foundation is a national not-for-profit organization, established in memory of J. Patrick Barnes by members of his family.  Patrick died at the age of 33 in late 1999 from complications of idiopathic thrombocytopenic purpura (ITP), a little known but not uncommon auto-immune disease. (DAISY is an acronym for Diseases Attacking the Immune System.)  The care Patrick and his family received from nurses while he was ill inspired this unique means of thanking nurses for making a profound difference in the lives of their patients and patient families. More information is available on the DAISY Foundation website.