Giving Back to The Foundation Supports Employee Growth 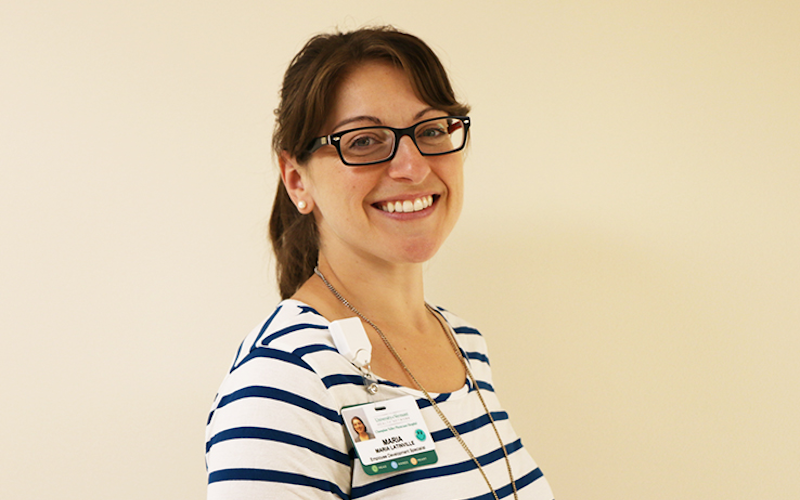 As a mother of two young children, Maria Latinville, MS sees growth in some form just about every day. Growth is also a big part of what drives her and the work she does at CVPH.

“So when we think about the three things that we focus on here every day, our patients, our people and our community, my job has a huge impact on the people who take care of the patients,” Maria explained. “And that work feels really good to me. I love when I help someone grow within their current role or help them grow into another role in the organization. It just brings me a lot of joy and excitement.”

Part of her work has involved assisting employees in securing scholarships and other funds to continue their education.

“I’ve done a lot of career counseling for employees. So, an employee will come to me and say, ‘I’m thinking about going back to school,’ or, ‘I want to go for a certification. I don’t even know how to start or what to do.’ So I’ve helped coach them through that. And I see the frontline experience of the positive impact that those scholarship funds have for our employees,” Maria said.

That is how she initially became connected with The Foundation of CVPH, which provides funds for some of those scholarships, education programs, conferences and certifications. Maria also became a recipient of that financial support she advocated for when she began her own career growth journey. With scholarship money provided by The Foundation, she was able to go back to school and get her master’s degree.

“That extra support was huge,” Maria remembered. “I’ve got little kids at home, so there’s daycare costs, diapers, and all kinds of family-related expenses. Having that additional support from The Foundation to put toward my master’s degree really meant a lot to me.”

“And not just from a financial perspective, but getting that master’s degree helped me in my career growth. It helped me move up to the Employee Development Manager position,” Maria continued. “So, when thinking about the career change that I’ve made in my life, The Foundation has made a huge, positive impact on my life. Also, the degree I got aligns more with the work that I’m doing. So now, I’m able to support our people and our organization in a much greater capacity than I was before.”

She also pointed out that the organization benefits. An example Maria offered was a clinical assistant at the hospital who received a scholarship from The Foundation to work toward becoming a Registered Nurse. After successfully completing the program, that clinical assistant became an RN at CVPH.

Keeping all of the funding local is something that is very important to Maria. And she has recognized that the impact goes far beyond an individual employee and the organization.

“It’s about the bigger picture, too. It’s like that saying, ‘It takes a village to raise a child.’ I think that’s what The Foundation does. They create that village around our patients, our people and the community.”

When she talks to other employees about potentially donating to The Foundation through its “Employee I Give” campaign, Maria explains to her colleagues that it does not take much to make a big difference.

“When we think about giving, I think some of us think that we have to take this huge dent out of our paycheck to give back. But, I don’t think that’s the case. Even a dollar per pay period adds up to a ferry pass for someone who needs to go to a doctor appointment in Vermont. So, I would say, don’t feel like you have to go big or make a huge sacrifice to your family and your personal life to have a really huge, positive impact. A little bit goes a long way.”

Employees can join the cause by donating online, filling out an I Give pledge card and turning it into The Foundation office at 75 Beekman Street in Plattsburgh, dropping the pledge card in interoffice mail to The Foundation of CVPH or scanning the filled out card and emailing it to kkalman@cvph.org. There are also a variety of ways that members of the public can give. Click here to learn more.