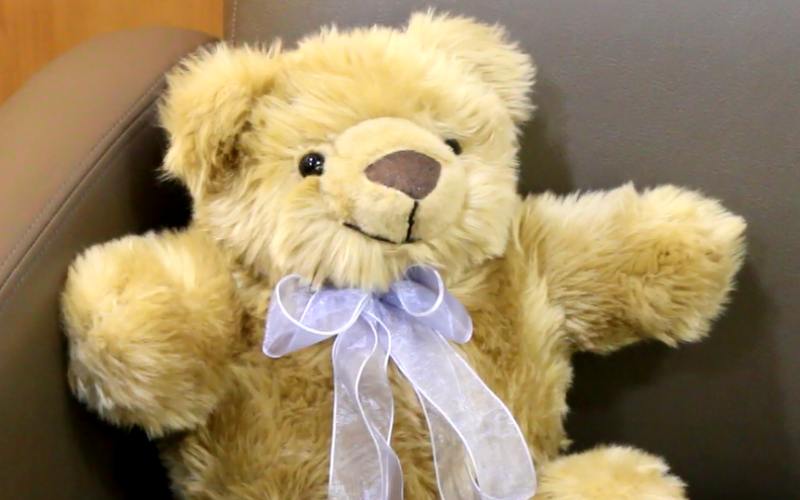 No matter what you may be going through, it’s hard not to feel at least a little bit better when you are holding a soft teddy bear in your arms. That’s the idea behind the donation of 18 “Comfort Cubs” to the Alice T. Miner Women and Children’s Center at CVPH.

The bears were dropped off at the hospital by North Country residents Beverly King and Tiffani Light, who are ambassadors with The Comfort Cub, a non-profit organization that provides the therapeutic bears to people across the country who have suffered tremendous loss.

Both King and Light have had to battle through their own tragedies. King was a survivor of the Las Vegas mass shooting on October 1, 2017. One of her good friends had a daughter from Vermont who was killed in the attack.

“In my journey of healing, this Comfort Cub program has helped me honor her and the 58 people who died that night,” King offered. “It continues to give hope and comfort to so many people who need it right now.”

Light fought back tears as she described how she first came across The Comfort Cub organization.

“In 2017, my husband and I lost our daughter, Zoe. We brought her here to the emergency room (at CVPH), but we had to leave empty handed. The hospital does a great job with their bereavement boxes and things they give families.”

She also noted that the nurses at CVPH were very supportive, sitting with her and her husband to offer compassion while they grieved.

“But a couple days later, I was given one of these bears by a friend. When I held it and I read the card that came with it, it was just amazing,” Light remembered.

The Light family came up with many ways to include the bear in their lives so that Zoe would never be forgotten.

“When we do family pictures every year, we have at least one or two photos where we’re holding the bear,” Light continued. “Some families have a tough time filming things when somebody is missing. So this bear has kind of been like our placeholder."

"Nothing’s ever going to replace the loss of someone you love, but to represent that they’re never really gone from your mind and your heart is something that we wouldn’t really have had without the gift of this bear.”

The cubs are specially weighted and intended to simulate the comfort of cradling a newborn. A card that can be personalized comes tied around the cub’s neck and can be removed. They were first designed by founder Marcella Johnson in 1999 after the loss of her infant son, George, due to a congenital disease. The cub was developed to help other women who suffered from the loss of their infant. However, they are also helpful for those whose children, including newborns, may have to stay in the hospital for an extended period of time before going home.

At CVPH, there is a process in place to help grieving women who have just lost their baby, including stillborn babies. The hospital provides memory boxes colored pink for girls, blue for boys, and a neutral box if the sex of the baby cannot be determined. In these boxes, women and loved ones will find things like the identification bands with the baby’s name, date of birth and who the parents are. A package of forget-me-not flowers that can be planted in memory of the baby is also included. Necklaces, bracelets, baby blankets and hats made by volunteers are also options. An angel ornament and a ring come in every memory box. And, there are opportunities for footprints of the baby that can be molded and bereavement pictures. Maternity patients and their loved ones are also offered resources to help cop with their loss. All of these options are provided free of charge by the hospital, allowing families to honor and remember their baby in any way they want.

The hospital also provides the same experience a woman gets after giving birth to a healthy baby, including a free discharge meal with frozen lasagna, water and brownies. And any woman who has lost their infant can push the button that plays the lullaby.

Now, these comfort cubs offer another way for women and their families to grieve and find comfort during such a difficult time.

“There’s mothers that we’ve given them to that have just latched right on to them,” CVPH Labor and Delivery Registered Nurse Mindy LaPier said. “It’s just so comforting to know that they are being welcomed.”

“I think it helps people realize they are not alone in their grief,” King commented. “There’s someone out there that you don’t even know who’s thinking about you having donated this bear. And, I think that’s most important for me. It’s nice to give it to somebody who I know. But to me, it’s more important if someone gets it and has really no idea who gave it to them, just that someone is out there that knows their pain.”

The hospital is exploring the possibility of giving the teddy bears to patients on other units to help them through tough times as well.

King and Light continue to work together to seek more financial gifts from local businesses and organizations in order to donate more comfort cubs to CVPH on a regular basis. For more information, head to The Comfort Cub website.