on Monday, June 28, 2021 in Community, Wellness, Foundation of CVPH by CVPH 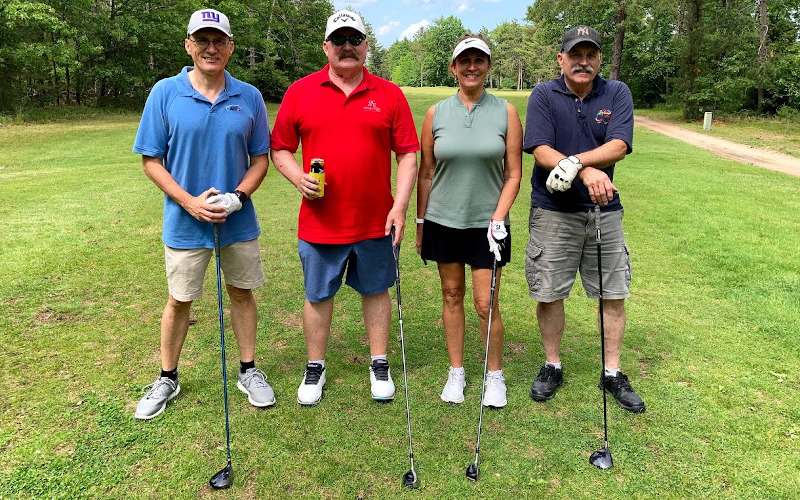 As much as golf is an individual sport, the game can also bring people together in a special way. For Dan, Tim, Pat and Kathy Coffey, golf has helped them remain connected with each other and their father for the last two decades.

June 4, 2021 was the 20th anniversary of the Jim Abbott & Dick Coffey Golf Tournament. Held at the Adirondack Golf & Country Club in Peru, the tournament benefits The Foundation of CVPH. It was started in memory of Dick Coffey, an avid golfer and a well-known accountant in the Plattsburgh area, who passed away in 2001. Jim Abbott was a partner with Coffey at the Abbott, Frenyea, Russell & Coffey PC firm and passed away in 2010. Like Coffey, Abbott was an immense community supporter and loved to golf. The tournament continued in both their names after Abbott died.

Since the tournament began in 2002, Dick Coffey’s children have come back to the Plattsburgh area every year to celebrate their dad and help improve the lives of people in their hometown.

“It’s always nice to have a reason to come up and visit the North Country and play lousy golf with my brothers and sister,” Tim Coffey said while on his way to the Lake City the day before this year’s tournament.

Tim has been living in Phoenix, Arizona for nearly 40 years. His sister, Kathy, hails from Washington state. Pat is closer, coming from Syracuse, NY. And Dan is about a two-and-a-half hour road trip from Albany, NY.

All four siblings are not always able to make it back for the tournament. But Dan has played every single year, and his brothers and sister are able to join him most years. He said the family rents a bunch of cabins on near Lake Champlain and has a great time catching up.

“It’s a great opportunity to get the family together,” Dan Coffey noted. “We try to get together for weddings and things like that. And during the pandemic, we’ve talked and played games online. But, that’s just not the same. This tournament is something we all mark on our calendars.”

Dan and Tim said the tournament gives them a chance to recount a lot of stories about their Dad, especially from the golf course.

“One time, we all saved up and bought him a brand new set of golf clubs for Christmas,” Tim recalled. “I was the first one going out with him in the spring. It’s the first time he’s using his new clubs. We get to the first green and Dad went to mark his ball, and I realized he was playing x-outs, which are golf balls that had been rejected.”

“I’m like, ‘Dad, you got brand new clubs! Go spend some money, buy yourself some nice golf balls.’ He was an accountant through and through.”

Tim chuckled when he brought up a memory from the first year of the tournament in 2002.

“They handed out a sleeve of golf balls to everybody that said Dick Coffey on them. And so we're figuring there are a lot of people playing that day. If they're using the golf balls and hitting them into the woods, about a week later, somebody is going to be playing a round of golf and find 10 or 12 golf balls with Dick Coffey’s name on them. And that person is going to think Dick Coffey was a really horrible golfer,” he said.

You won’t find any PGA-worthy scores among the tournament players any given year. Something everyone can count on, however, is the generosity that scores a big win for the community each year. This year, 120 golfers raised more than $13,000, bringing the total brought in over the 20 years of the tournament to nearly a quarter of a million dollars ($236,000).

That money goes right back into the local community. For the first ten years of the tournament, $110,000 in funds benefited the CVPH Heart Center, including the purchase of Holter monitors. The device can record electrical activity of the heart continuously for 24 hours or longer while patients are away from their provider’s office. Since 2012, proceeds from the tournament have gone to patient-centered programs at the hospital and to support community wellness.

“Realizing that the generosity of these players has helped so many people over the last 20 years is really quite special,” Foundation of CVPH Events and Special Projects Michelle Senecal offered. “I know the Abbott and Coffey families are incredibly grateful for everyone who participated this year and at any point over the last two decades. It is truly making a difference in the North Country.”

You don’t need to be a golfer to make a difference in the lives of patients across the region. To learn more about the impact your generosity can have or to offer your support right now, visit The Foundation of CVPH online.