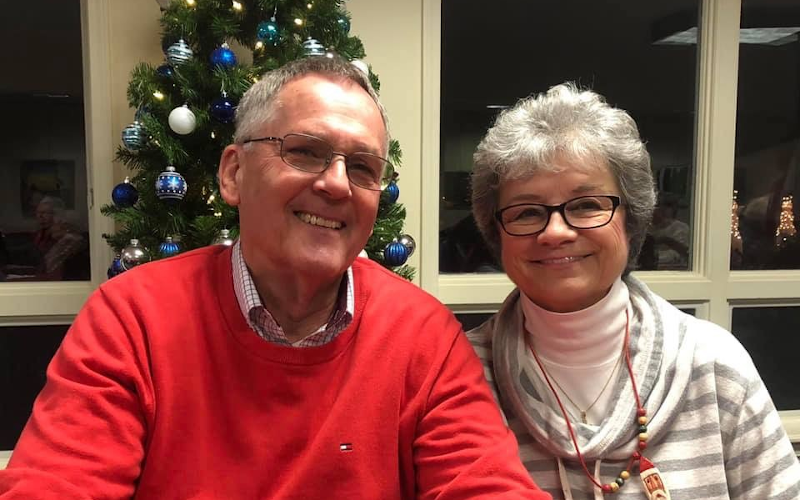 Lying in a hospital bed, battling to breathe, was not the start to 2021 that Jane Woods envisioned. But after taking on COVID-19 for four days at CVPH, she left with a renewed sense of hope and overwhelming gratitude that she shared through a generous donation to The Foundation of CVPH’s Honor a Caregiver program.

The 73-year-old Plattsburgh resident’s fight with the dreadful disease began as we kicked off a new year near the height of the pandemic in the United States. Like many others who were infected, she had a cough, something that seemed to always come up when she had a cold, and did not think much of it.

That all changed a few days later.

“It’s like a light switch just flipped,” Woods said. “My daughter called me, and apparently I wasn’t making any sense on the phone with her.”

Her husband of 22 years arrived home from an errand and noticed the same thing and suggested that he take her to get tested. After having a very hard time getting out of the truck at the testing site and again when she got home, Woods’ husband decided it was time to go to the hospital.

As she arrived at the CVPH Emergency Department, her condition was worsening. Still, she took notice of how respectful the staff and nurses were, saying everyone was wonderful. After initially expecting to just stay the night, Woods was admitted to the hospital and learned that she had tested positive for COVID-19. She was suffering from pneumonia, had a significant fever and had to be put on oxygen because of the virus. At one point, Father William Reamer, the Roman Catholic Chaplain at CVPH, came into her room, offered her communion and anointing of the sick.

“At this stage, I was like, I think this is it,” Woods said. “But thankfully, God wasn’t ready for me.”

Even with her health struggles, Woods felt encouraged by the care she was receiving on the Progressive Care unit, an area of the hospital dedicated to treating patients fighting COVID-19.

“At one point, my husband called and couldn’t get an answer on my phone. So, he got sent out to the nurses station, and they came in to find out if I was okay. It turned out I was laying on the phone, so I never heard it. But, that’s how thoughtful those nurses were on that floor.”

She noted how impressed she was with the attention to detail from the nurses and how much communicating they did with her husband and her daughter, who is a nurse in Vermont. In addition to comforting her loved ones, Woods said she was beyond thankful for the compassion that the nurses displayed and how quickly they responded to her needs.

“Every time I pushed that buzzer, they were there immediately, getting into their gowns and masks and so on to attend to me.”

As the mother and grandmother started to improve, she was amazed by the positive attitude that everyone she encountered had in the midst of a pandemic.

“It’s remarkable how happy they all were,” Woods remarked. “I mean, they just always seemed to be in a good mood, you know?”

That good mood spilled into some joking around after a while. Woods noticed that one of the odd changes she experienced during her battle with COVID-19 was a sudden craving she acquired.

“The day before I went home, they served me Cream of Wheat. I haven’t stopped eating it since they served it to me at the hospital. It was so good,” she laughed as she thought about it. “The joke was that, you know, just give her Cream of Wheat and Jell-O, and she’ll be happy.”

Light-hearted moments like that helped keep her spirits up, and she was well enough to go home after four days. Several months later, she was still impacted by some symptoms lingering from COVID-19, such as having memory problems and body aches. Her husband also got sick from the virus, though his case was not serious enough to require hospitalization.

Now that Woods and most of her family are fully vaccinated, she is looking forward to spending a lot more time with her loved ones. She is also doing more volunteering at St. Vincent de Paul Thrift Store in Peru. And she still remembers her time spent at the hospital.

“They were special. I just want them to know that I appreciated everything they did.”

To show that appreciation, Woods decided to donate to The Foundation of CVPH in honor of the team of nurses who stood by her side in her time of need. Her gift of gratitude went to The Foundation’s Honor a Caregiver program, which supports other patients, helps purchase state-of-the-art medical equipment for the hospital and its practices, enhances the skills of care providers at CVPH and improves the health of the communities the hospital serves. As part of the program, the caregiver also receives a notification about the gift, along with a “Healthcare Hero” pin – letting our whole community know about your caregiver’s extraordinary efforts. Below are several of our caregivers who have been honored through June 30, 2021.

If you or someone you know has received meaningful comfort and care during a visit to CVPH, Woods and The Foundation encourage you to consider giving to the Honor a Caregiver program. To learn more or to donate, click here. You can also nominate a nurse for a DAISY Award, which honors the clinical skill and compassion of licensed nurses (LPN, RN or APRN) at CVPH. Read more about the difference our DAISY Award honorees make every day.