on Friday, November 5, 2021 in Heart Health, Employees, Nursing, Foundation of CVPH by CVPH 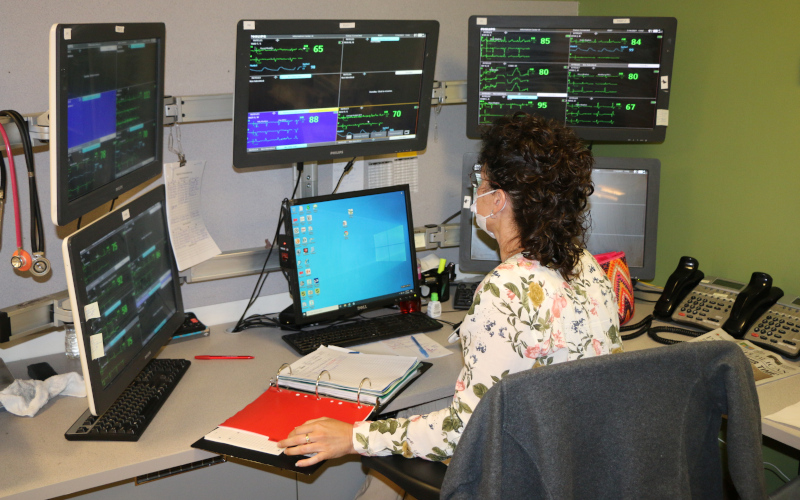 Rhythms, waveforms and alarms keep CVPH Telemetry Technician Tonya LaFountain on her toes as she maintains a constant watch on her patients on R3 every day. It was Tonya’s attention to those details, a strong curiosity and a willingness to speak up that may ultimately have saved the life of a patient.

On a morning last spring, Tonya was in the midst of the usual hustle and bustle of her work when she noticed something just did not seem right with one of her patients. The woman was being treated for an abdominal issue, but Tonya noticed the patient, who was on a pacemaker, was showing some heart rhythms and alarms that were not making much sense to her.

Still, Tonya was concerned with what she was seeing and informed Andee LaMora, BSN, RN, CMSRN. Andee, one of the Clinical Education Managers at the hospital, was starting her shift caring for patients on R5, including the one Tonya had been keeping an eye on.

“And I said to Andee that we had to do something,” Tonya recalled. “I was just adamant. I had been watching this patient, and something just wasn’t right.”

Andee agreed and began looking into the issue further. She consulted with fellow Clinical Education Manager John Bologna and Letitia Lim, MD, knowing the patient was due to be discharged the next day. Instead, the team decided to interrogate the pacemaker, essentially evaluating the electrical settings of the device. They quickly learned its batteries were dying, leading to the concerning rhythms that Tonya originally spotted.

“So by following up on that, it led to potentially saving that patient’s life,” Andee said. “Had she been discharged without this issue being addressed, we don’t know what would’ve happened.”

The patient was scheduled for immediate replacement of the pacemaker before being discharged.

Tonya had a better understanding of the seriousness of the situation thanks to a course she has been taking to become a Cardiac Device Technician. The 9-year CVPH veteran was initially inspired by a separate close call this past Christmas, when that patient’s pacemaker spiked to a heart rate of 130 beats per minute and she did not understand why. Just as was the case when she was a Clinical Assistant (CA) at the hospital for seven years, Tonya got curious about what was happening.

“When I was an aide on the floor, I learned a lot about wounds so I could help more patients,” she mentioned. “So the December incident made me think I could do better by learning more about pacemakers.”

“We need to always be questioning the why – why something is happening, why are we doing things a certain way. We are in an environment where we need to be constantly learning what is new and stay up-to-date on best practices.” Andee commented. “Tonya took the initiative to learn more about her role so that she can grow, and that’s really impressive.”

“And if you don’t know, investigate and figure out how you can learn more about what’s going on,” she added.

Tonya pointed to the financial support she received from The Foundation of CVPH and her union, SEIU-1199, in helping her achieve her goals to learn and grow professionally within the organization. Both helped cover the costs of the course she is currently taking that helped her better understand how pacemakers work and what irregular rhythms could be indicating.  Tonya encourages anyone interested in furthering their education to reach out to The Foundation and their union, if they are represented by SEIU-1199 or NYSNA.

“When our people continue to learn, whether it’s through additional courses at our local colleges and universities or attending a national conference, our patients also benefit from improved care and better experiences at the hospital,” CVPH Associate Vice President of Philanthropy Kerry Haley, CFRE stated. “We are thrilled to support the educational and professional goals of our people every opportunity we get.”

The hospital and health care have been major parts of Tonya’s life. She was born at CVPH and started in the industry as a Certified Nursing Assistant in high school. “I loved the aspect of just helping people,” she said. Tonya spends as much time as she can with her 3-year-old nephew when she’s not working or studying and dreams of spending retirement in Florida. She also looks forward to doing whatever she can to always help her patients and colleagues.

“I’m like a second set of eyes for the patient, but also for the nurses, physicians and others who are providing care,” she offered. “I can’t do the hands on things I used to do as a CA, but I can at least make sure you, as a patient, are safe. That’s what I can do to help my patients.”

Andee says this experience is a perfect example of the team care that patients at CVPH can count on.

“The whole hospital runs as a team effort. If you don’t know something, there’s somebody here who does and is always willing to help, so you don’t have to be an expert in everything,” she said. “So the idea that Tonya saw something, questioned it, and then we took it and ran with it and connected the dots as a team was really important.”

“Tonya always advocates for her patients and for the staff. She’s very dedicated to what she does every day. And when you work with her, it comes through that she cares deeply.”

Tonya received a “Good Catch” award from the hospital for her attention to detail and willingness to speak up and advocate for her patient, ultimately preventing a potentially life-threatening situation.