on Thursday, January 6, 2022 in Community, Foundation of CVPH by CVPH 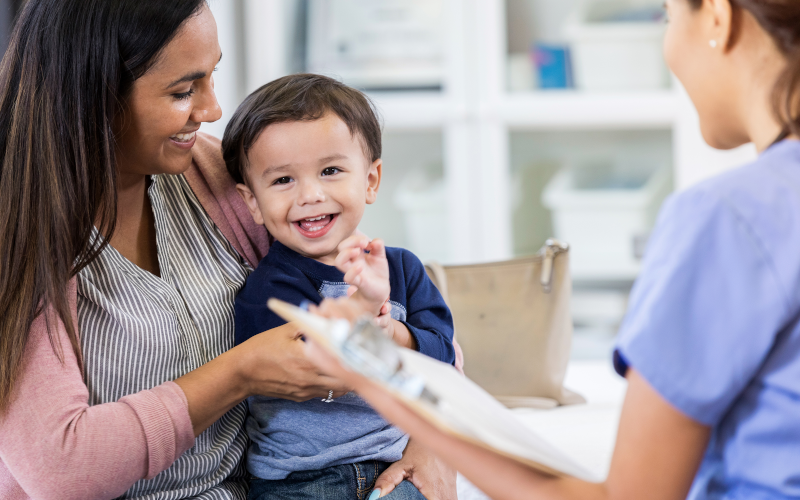 The generosity of donors to The Foundation of CVPH and United Way of the Adirondack Region paved the way for a Christmas gift one northern New York family will not soon forget: a cab ride home for the holidays.

A one-year-old from Clinton County, and his family had been through some difficult times recently. Less than a week before Christmas, the little bubbly boy was in Boston with his family to begin his chemotherapy.

“Even through all this, all the chemo, every bad thing that’s ever happened to him, he still smiles. That baby does not stop smiling at all,” the child’s mother said. “He’s a lot stronger than I could ever imagine. He is my hero, honestly.”

The mother would soon have another hero who would ultimately save their holiday season. She and her baby were looking forward to heading home from the hospital in Boston just four days before Christmas. That is when disaster struck. The mother said a case worker at the hospital had set up a ride home for them, but that ride never showed up. They waited in the lobby for hours while attempts were made to find another ride. Having no luck, the hospital booked a hotel room for them for the night.

She was facing a very real possibility that she and her young son would be stuck in Boston until after the New Year, with many medical transport companies in the Boston area offering little to no options for rides during the holidays, especially back to the North Country. Then came a call from her sister saying that someone was on the way to bring her home.

“I was so thrilled. I started crying, just feeling a whole bunch of relief. I was so happy,” the mother recalled.

It was three days before Christmas, but it felt like the holiday was arriving early for the family when Syed Abbas pulled up in his cab to pick them up.

“I do medical transportation. I take anyone who doesn’t have a vehicle and pretty much anyone who has Medicaid to and from doctor appointments, things like that,” Syed stated. “It’s always nice trying to help people, and you know, they appreciate it.”

Syed has been running his own operation, called Loyal Cab Services, Inc., for about three years. He drives mostly elderly patients to their appointments in the Plattsburgh area and frequently crosses the lake to take them to Burlington. The Long Island native is also no stranger to longer rides, taking some patients as far south as New York City.

“I appreciate doing the medical field more because they can just really use the help, and they’re appreciative of it,” Syed said.

It was a call shortly before Christmas from The Foundation of CVPH Development Associate Karen Kalman that would send Syed on a trip to Boston. The mother’s sister had called The Foundation explaining the situation in Boston and Karen immediately jumped into action to find a ride for the woman and her baby.

“This family was already going through so much,” Karen said. “I knew it was going to possibly be difficult to get them a ride home in time for Christmas, but I had to try. And Syed often times is willing to drop everything he’s doing to help out at a moment’s notice.”

“Every time Karen has called me, I’ve never let her down. It might take me a little bit of time sometimes, because it’s a little busy here and there or I’m driving other patients. But, I always try to help out as much as I possibly can, no matter what time it is, no matter what kind of job it is or where it is,” he replied.

The baby’s mother was stunned at the sheer generosity displayed by Syed and felt a wave of gratitude wash over her as he pulled up to the hospital.

“Honestly, I didn’t think that kindness existed in this world anymore. I was so relieved, so happy. Pretty much all the stress that I had on my plate with my son's chemo was all gone,” she admitted.

It took about five hours to get back to northern New York, and when they pulled into the driveway, her mother and sister were there waiting to greet them with big hugs. It was mission accomplished, and she said she felt like anything in the world was possible now after being able to get home in time for the holidays. She also wanted to offer her thanks to The Foundation of CVPH and United Way for teaming up to pay for the ride home, as well as the donors for both organizations that made it all possible.

“I am honestly forever grateful for everybody that’s helped us through all of these problems and this hard time that we’ve had,” the mother said as she started to get emotional. “It just means so much to me that there’s still people out there who care and will donate money to help people they don’t even know.”

“It was an honor to partner with The Foundation of CVPH to get this difficult situation resolved,” President and CEO of United Way of the Adirondack Region John Bernardi offered. “By collaborating, we were able to bring expertise and resources together in order to get this stranded family home in time for Christmas. It was a wonderful day.”

The baby boy, who is facing more treatment for his cancer, for now is back to his favorite things: being outside and watching CoComelon. Conveniently, this treatment will be closer to home at the University of Vermont Medical Center.

For more information on travel assistance funds available to families in our area through the Foundation of CVPH, or if you’d like to donate, visit our website. Learn more about United Way for the Adirondack Region and the resources available there by clicking here.