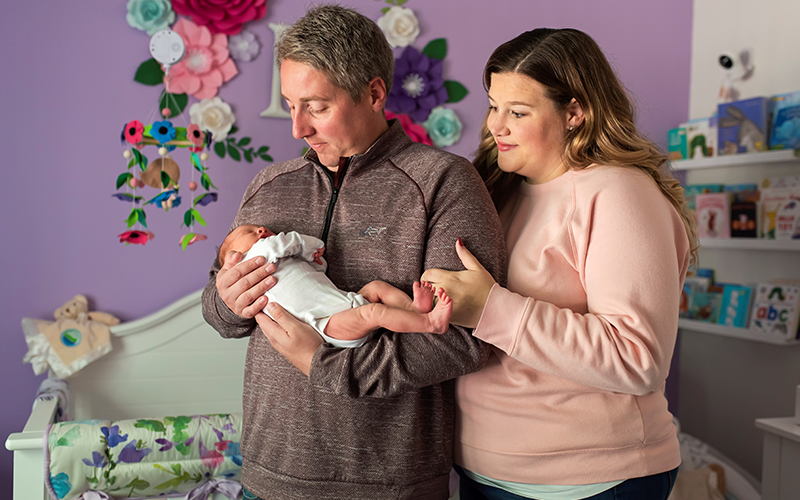 More than three years of waiting, worrying and wondering had finally come to this. Abby Bennett, now the Director of Nursing Research and Clinical Practice at The University of Vermont Health Network-Champlain Valley Physicians Hospital (CVPH), was lying in a bed in the hospital’s Alice T. Miner Women and Children’s Center (WCC) preparing to give birth to her first child.

“It was just kind of surreal,” Abby said.

She and her husband Ryan, a Licensed Funeral Director at Brown Funeral Home and member of the Foundation of CVPH Board of Directors, had been trying to have children for quite some time when Abby became pregnant through in vitro fertilization.

“We went through a lot of heartbreak before she came. And so it kind of felt like this moment was never going to come,” Abby said.

That moment, and their daughter Meredith, did come in a sudden and intense end to Abby’s 22 hours of labor when their nurse, Catherine Dubay, came in to check on them.

“She abruptly took off running out of the room. And I looked at Abby and I said, ‘Well, I don’t know what that’s all about.’ And then all of a sudden the cavalry comes in, and three minutes later, the baby was delivered,” Ryan recalled.

“Even when we reached a point of panic, Cathy had it under control,” Abby added. “Even with the urgency of the situation, she was able to make us feel like we had almost kind of done this before.”

That is one of the many reasons Abby and Ryan reached out to The Foundation about their birthing experience, sharing high praise in particular for the care that Catherine, a 22-year veteran at CVPH, provided.

“She was fantastic, just very different,” Ryan remembered. “The interaction was certainly more than just coming in and checking on things. There was more caring and genuine concern about Abby.”

“Cathy was there providing more than just nursing care,” Abby said. “We were able to chat a little bit about her family and we just enjoyed our time with her. She was just so personable. We really lucked out having her both days I was in labor and when our baby finally arrived.”

While Cathy stood out, the Bennetts commented on the highly positive experience they had with the entire care team they encountered at the hospital. The time Ryan spent there also inspired him to support the WCC further, helping

raise money from Plattsburgh Memorials and Matthews Aurora Funeral Solutions (through its Children’s Foundation) to donate to The Foundation. That money purchased one of six new bassinets now being enjoyed by the hospital’s youngest patients.

Now, Abby and Ryan are relishing every moment they have with their daughter Meredith, always appreciative of the safe delivery of their healthy baby girl.

“Even though all of our checkups (during pregnancy) were great, it just didn’t feel real until she was here. I couldn’t believe that we were going to get to be parents. And so once she was here, I couldn’t say that anymore. She was really here, and it was totally amazing. The fact that we had such great care from a team that was good and warm and nurturing for us was icing on the cake.”

There are multiple ways you can recognize any of our fabulous caregivers. The DAISY Award program is a great way to honor the tremendous clinical skill and compassion from our licensed nurses (LPN, RN or APRN) at CVPH. A recipient is named quarterly, and you can read about all of our honorees. To recognize a caregiver in any profession and make a donation in that person’s honor, visit The Foundation of CVPH’s page to learn more about the Honor a Caregiver program.