on Monday, August 1, 2022 in Emergency Care, Foundation of CVPH by CVPH 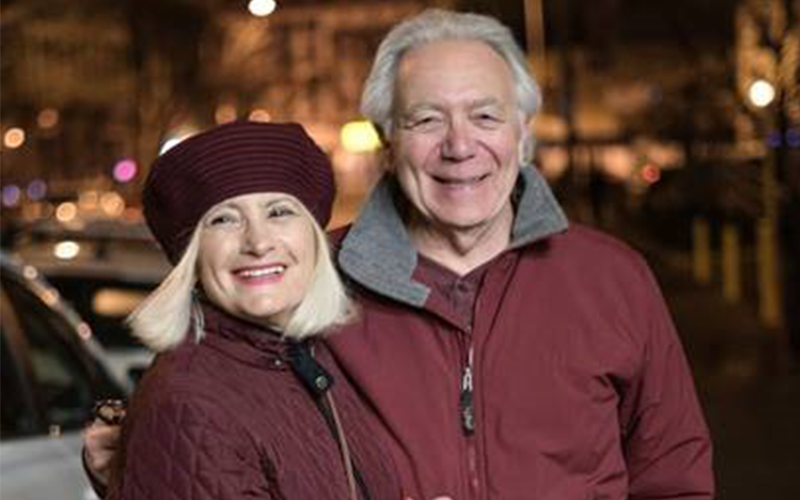 If not for the care Rich Guglielmo has received in the Emergency Department (ED) at Champlain Valley Physicians Hospital (CVPH), his wife of 53 years, Judy, is certain she would be a widow right now.

“A couple of times, they’ve saved his life over the last few years,” she stated with conviction.

Rich was rushed to the hospital after suffering an anaphylactic reaction when he was stung by a yellow jacket this past summer. Judy said after seven or eight hours in the emergency room, “and with a couple of EpiPens in him,” she was able to bring her husband home. And early in the pandemic, before vaccines were available, Rich’s bout with COVID-19 led to an unrelated discovery while he was in the ED.

“The potassium in his body was so low that that could have killed him,” Judy recalled.

“It was medicine I was on, not for COVID-19, which was sucking it down. (Catching that) saved my life,” Rich added.

That life-saving care and the couple’s connection to the hospital - since moving to the North Country about a half-century ago have inspired the Guglielmos to donate $50,000 to The Foundation of CVPH over the next five years. That money is slated to support the Emergency Department team and the patients, like Rich, that they care for.

“We’ve always received great treatment and felt a sense of community,” Rich explained. “We’ve known a lot of people who have worked at the hospital. And CVPH is really the heart of this area.”

“And we’ve always known the value of CVPH, we’ve always seen the value here. Because of the pandemic, health care has been on so many people’s minds, and we just want to help in any way that we can.”

Judy’s connection with the hospital is particularly strong. She has supported numerous Foundation events over the years and is somewhat famous for her “Adirondack Chairs,” which she paints each year with the theme of the annual June fundraiser. Her chairs have been auctioned for thousands of dollars. So for the Plattsburgh couple, it made a lot of sense to continue supporting the non-profit and CVPH with $50,000 set aside in their will. However, realizing the need is great now, they decided to see if there was an opportunity to do some good sooner.

“We wanted to spend the money the way we want and see how that is benefiting our hospital and community, instead of when we’re not here anymore,” Judy explained. “Plattsburgh has been very good to us and we have had much success, so we felt it was time for us to do something for the community.”

A call to their banker helped set up an option that could do just that: a qualified charitable distribution from their Individual Retirement Account (IRA).

“This can be a great tool for someone to meet their philanthropic goals,” CVPH Associate Vice President of Philanthropy Kerry Haley, CFRE offered.

Kerry explained how a qualified charitable distribution works. Once you reach the age of 72, the Internal Revenue Service (IRS) requires a certain amount of money be withdrawn from your IRA. Additionally, the money that is withdrawn will be taxed by the federal government as ordinary income. If the money is not taken out, you get stuck with a significant penalty to pay the IRS. One way to avoid both the income tax and the penalty is to donate that money directly to a charity.

“You can direct up to $100,000 from the IRA each year to charity. That can count for the money that the IRS requires you to take out of your IRAs, and you don’t pay a dime in taxes, it’s tax free,” Blair Watson, Senior Planned Giving Officer at The University of Vermont Health Network, said.

“If you are at least 72-years-old and want to make a donation, instead of taking the money out of your savings account, take it out of your IRA, which you have to do anyway,” Kerry added. “That way, you’re doubling your spending power, in a sense. When you’re doing a five-year plan like the Guglielmos, it’s a powerful way to make a gift that can have a tremendous impact on your community.”

“What we like about this is that we can do a lot of good with that $10,000 each year right now, and we don’t have to lose any of it to taxes. So The Foundation gets the full amount, instead of what’s left if we were to withdraw from the account,” Judy added.

She and her husband said it was a simple process to set up. “A phone call, how easy is that,” Rich said. “We thought that by sharing our story, others may become aware of this program and hopefully do the same.”

Blair noted that anyone considering a qualified charitable distribution should talk with their financial advisor first.

“We tell people they should talk to their advisor, because we don’t know how this fits into your whole financial picture.”

Blair pointed out that the advisor can make sure the donation is set up directly from the IRA to The Foundation, and that donors can feel comfortable knowing that this is a common setup in the financial industry.

“It’s also a good idea to partner with The Foundation to determine if there’s an area of interest or program you want to support with your gift. Another great thing about giving to The Foundation is that your contribution will stay in the community and directly benefit your family, friends, co-workers and neighbors.”

To learn more about qualified charitable distributions and other ways you can make a difference in the lives of our patients, contact The Foundation at (518) 562-7168 or email Kerry Haley, Associate Vice President of Philanthropy at CVPH, at KHaley@cvph.org. You can also visit our planned giving website for resources on charting your charitable path, gifts that pay you income and getting answers to frequently asked questions.