Patient shares story ahead of Stepping Out for Your Heart Event

on Friday, September 16, 2022 in Heart Health, Women's Health, Foundation of CVPH by CVPH 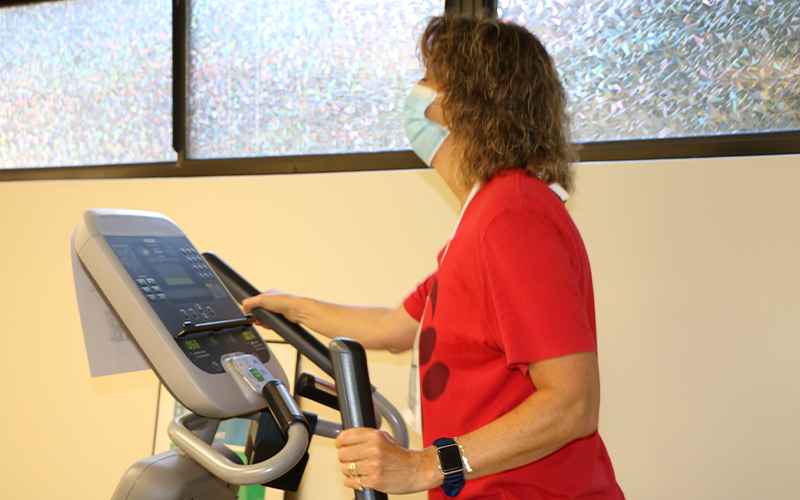 A decision to seek out additional insurance may very well have saved Teri Frederick’s life. After learning she has congestive heart failure, the 53-year-old from West Chazy is now hoping to inspire others to listen closely to their heart and body and speak up about worrying symptoms.

A whirlwind of events for Frederick began in the spring of 2022, when she was denied an additional life insurance policy following a routine physical exam. Frederick considered herself to be fit and relatively active, and so she was surprised to find out the physical showed a cardiac marker of concern. Tests ordered by her Primary Care Provider (PCP) indicated congestive heart failure, and further testing at the CVPH Heart Center confirmed the diagnosis.

“It was scary, like extremely scary,” Frederick admitted. “My husband and I have been together for almost 37 years now, and it scared him just as bad. And he is saying, ‘I can’t lose you.’ And I told him you’re not going to, not that easy.”

Hanna Slim, MD, MPH, a cardiologist at the CVPH Heart Center who has cared for Frederick, explained that congestive heart failure occurs when the heart does not pump blood as well as it should. He estimated roughly a third of patients at the Heart Center have this condition, many caused by coronary artery disease. However, he noted that Frederick’s case is considered non-ischemic, which is much less common, and can be caused by a variety of things from medications to viral infections or even genetics.

Always trying to put a positive spin on things, Frederick was grateful she was diagnosed in June, before her only son’s wedding set to happen in August. “If I had suffered an episode at the wedding and had that be the memory of the day, I just would’ve been devastated,” she said.

“In her situation, I think the timing was pretty good. It was caught before it had progressed too far,” Hanna Slim, MD, MPH explained. “Sometimes, we see people in the emergency room in much worse condition, suffering more severe consequences when we make the diagnosis (of congestive heart failure).”

Thankfully, Frederick’s symptoms were not severe. Still, she confided that there were so many questions running through her mind. How would this change her life? What would she be able to eat? At 53-years-old, was she now looking at a significantly lower life expectancy? Could going up stairs at her job be dangerous?

Part of her treatment plan included cardiac rehabilitation at CVPH for 13 weeks, which initially made Frederick nervous. That first day in the program changed everything for her, however.

“I did not realize how apprehensive I was to do anything. I’ll be honest, that first day at cardiac rehab gave me the most relief that I’ve felt. I felt like, okay, I can do this and know I’m not going to have a heart attack. It just felt good to get back on the machines and know this can be part of my life again, and not be so scared of everything,” she offered.

“The cardiac rehab program certainly has physical benefits. But we also see that it helps psychologically for the patient,” Dr. Slim added. “When you’re hit with this diagnosis, all sorts of questions come to mind. Once you get into the rehab program, you start exercising, and you’re monitored all the time. So then you see it’s pretty safe. And it’s actually showing some improvement. So, it makes a big difference, and that’s what we’re seeing with Teri.”

In addition to the regular exercise, Dr. Slim prescribed medication that he said is showing promising results leading to improved heart function. And consultations with heart failure specialist Aderonke Adeniyi, MD at University of Vermont Medical Center have provided further education for Frederick on how to live with congestive heart failure and still enjoy a high quality of life.

“Knowing there’s this team behind me really makes all the difference,” Frederick said.

With her brother also being diagnosed with congestive heart failure three years ago, Dr. Adeniyi and Dr. Slim have both recommended that her family undergo genetic testing, as the condition can be hereditary.

“As soon as I found out I had it, I was on the phone with my sister and my brothers, saying come on guys, go get tested. We all became more aware and urgent with it, instead of putting it off and looking into it later,” she said.

It has been an eye-opening experience for Frederick. Looking back, she now realizes the signs were there beyond her brother’s diagnosis. She had symptoms like shortness of breath, frequent exhaustion, a new unexplained cough and dizzy spells. Going for walks and exercising were much more difficult than before. Over the past couple of years, she thought those symptoms could be explained by other health-related issues, including a bout with COVID-19 and pneumonia in 2021, sleep apnea and menopause.

“It’s when there are ongoing symptoms that you should be concerned. If you notice a steady decline in your exercise capacity. Like, I can’t get up the stairs without being out of breath, and that never used to be a problem. If a family member or friend notices a difference in you. Listen to your body, and if you feel something is wrong, discuss it with your primary care doctor. Your doctor can help figure out what’s serious and what’s not serious and order appropriate tests from there,” Dr. Slim suggested.

“If you’re having symptoms that don’t feel right, you need to pursue them,” Frederick added. “Go with your gut and trust your doctors.”

That is going to be one of the major themes she’ll be addressing as a speaker at The Foundation of CVPH’s eighth annual Stepping out for Your Heart event on September 22 at the West Side Ballroom in Plattsburgh. The event raises awareness about heart disease and stroke, with proceeds directly impacting the care of cardiology patients across the North Country.

Frederick, admitting she is not used to speaking to larger groups, said she was inspired to talk at the event by her cardiac rehab team and the care she has received throughout her experience with congestive heart failure. She is also beyond grateful for the support she has received from so many people.

“Everybody I dealt with in the cardiology offices and rehab at CVPH, they all made me feel important and never rushed. My husband has been by my side every step of the way. He hasn’t missed any of my appointments. And he’s even doing the same things I’m doing, eating right and exercising, so I don’t ever feel alone. My entire family is amazing and has been so supportive.”

And seeing the success that her brother has had on medication for his congestive heart failure, she and her care team are optimistic that she will follow a similar path.

“Did I ever expect to have congestive heart failure? No,” Frederick stated. “But I’ve always been an optimistic person, so I need to stay optimistic and know that I’m going to get through this.