A Man With A Plan

Mike Cahoon Is Committed To Keeping His Community Safe 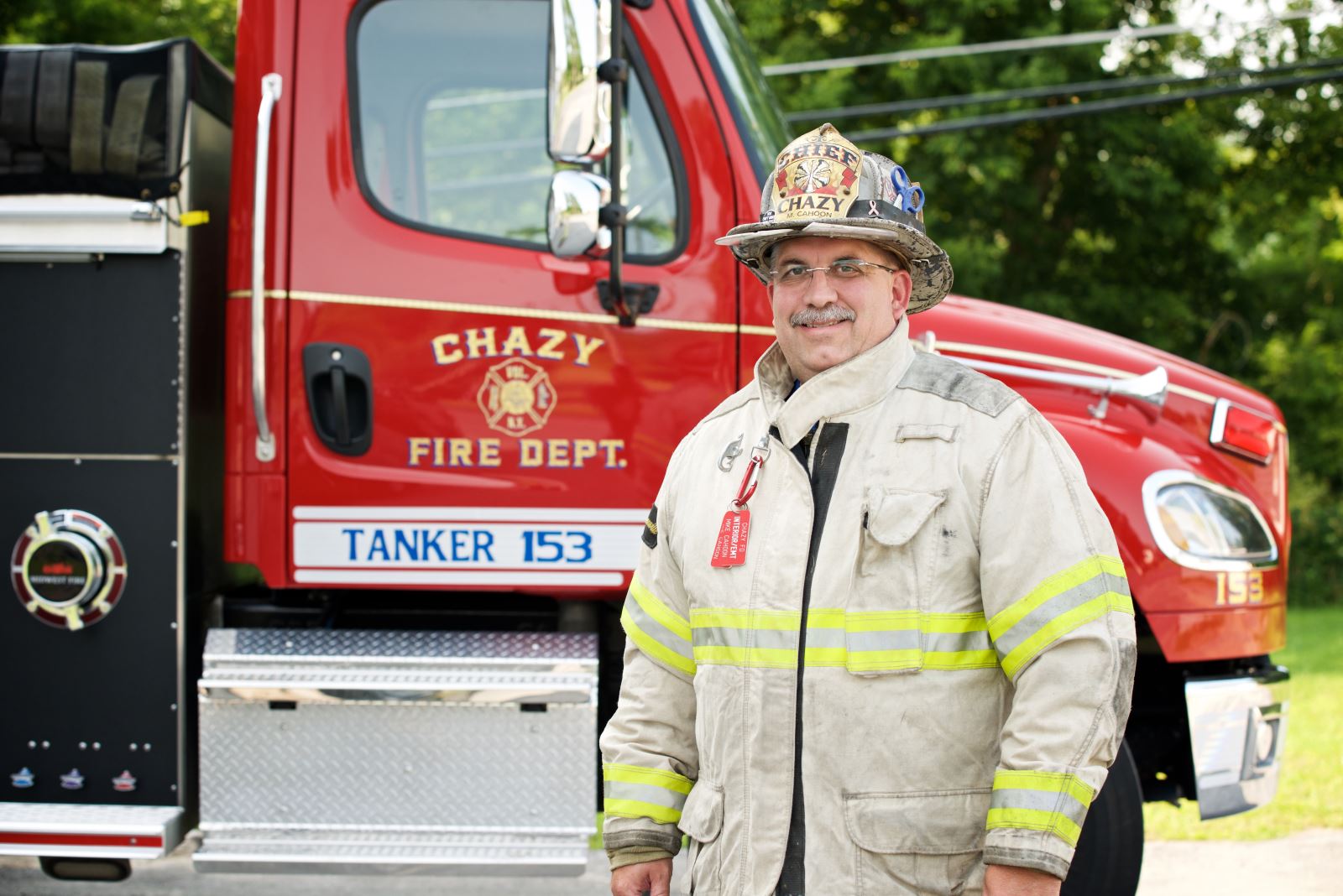 If Mike Cahoon shows up to work bleary eyed and a bit sluggish, no one wonders anymore what he’s been up to. Mike is the CVPH Director of Emergency Management and has served as the chief of the Chazy Fire Department for 20 years so it’s likely he’s been up most of the night with other dedicated volunteer firefighters dousing a fire.

He’s been a volunteer firefighter for 32 years and has become expert at balancing family life with his career and his intensive involvement with the area’s fire and rescue system. Mike also serves as the Deputy Fire Coordinator for Clinton County.

At CVPH his responsibilities include assuring that the employees and physicians at CVPH have the training and resources needed for any emergency – internal and external.  He also helps to secure and manage grants that support that mission.  EMT of CVPH and the CVPH Security Department are part of his responsibilities in addition to serving as the hospital’s safety officer and environment of care/life safety team member.

Immersed in emergency management at CVPH, Mike’s off duty time is consumed with family – his wife and 2 children and his fire department family.  His commitment to emergency management is evidenced by his extensive resume of local and statewide involvement.  In addition to leading the Chazy department, Mike has served in numerous regional and state positions: including Fire Service Instructor, FEMA Emergency Program Manager, Health Care Association of New York State’s (HANYS) Emergency Preparedness Advisory Committee and has served two terms as the Chairman of the Clinton County Fire Advisory Board.  He’s a member of the Clinton County EMS Advisory Board, Clinton County Multi-Agency Coordination Group (CCMAC), the Clinton County Critical Incident Stress Debriefing (CISD) Debriefing Team and the National Volunteer Fire Council.  It’s easy to understand why his mantra is “plan for the worst – hope for the best.”

And, given where he grew up, it’s really no surprise that both his professional and personal life involves fire and rescue.   The Rhode Island native’s homestead was next to a fire station. “I literally grew up around it. I have always just wanted to serve the community.”

Before joining the Air Force which would bring him to Plattsburgh, Mike volunteered as a firefighter in his hometown. And, while stationed at Plattsburgh Air Force Base (PAFB), the Desert Storm /Shield veteran was assigned to the base’s fire department.  While at PAFB, he met his wife and adopted the North Country as his home.

Whether training future firefighters or coordinating county wide emergency response efforts, Mike said the need for volunteers continues to be a challenge. “There was a time, for instance, that there was a waiting list to be part of our fire department. Those days are gone. People work long hours or out of town. There are so many things that take up their time.”  Securing a corps of volunteers to adequately meet the needs of the community can be difficult.

Despite those challenges, volunteers continue to be the backbone of this region’s emergency management system, Mike maintains. “If people don’t volunteer who would be there?”  he offers .   There is only one paid fire department in the county while most departments in the county have some paid EMS coverage. “Nearly 65% of all the calls in Clinton County are medical,” he said demonstrating the need for continual coverage.  The men and women who give up a good night’s sleep, leave family dinners or miss a school play to help others are extraordinary. “They make a real difference in their communities.”

He uses words like pride, dedication and commitment when recruiting people to get involved in their community’s fire department.  “I think that knowing you are really helping people and you are part of a team are good reasons to get involved. You become like family.”

“You can see some tough stuff,” Mike said.  Witnessing fire destroy a friend’s home or business or  attending an EMS call where a child has died are experiences that stick with the veteran firefighter.  “It’s that family that will help get you through tough times.”