Helping Patients One Visit at A Time 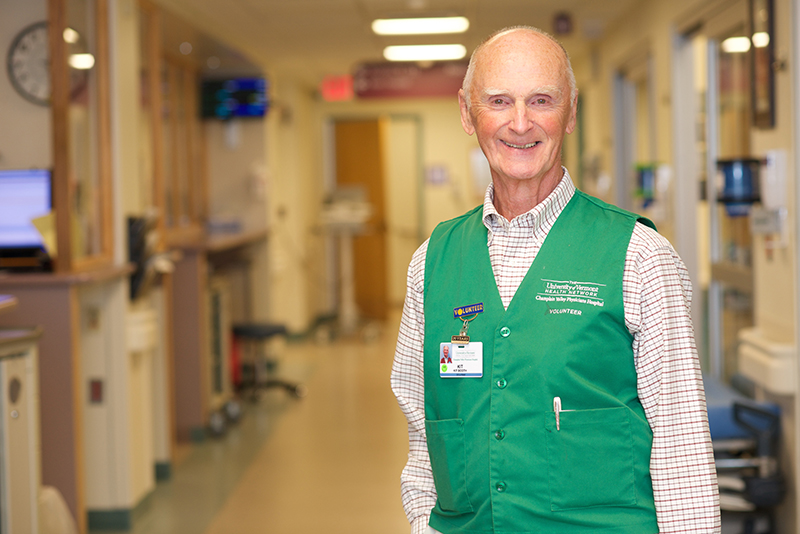 The Emergency Department is a perfect assignment for Kit Booth.  In that fast-paced environment, he’s able to make genuine connection with someone in need.  It seems to come naturally to this affable and authentic gentleman.  As part of a corps of volunteers assigned to the Emergency Department – which sees close to 54,000 patients each year, Kit visits patients to see what they may need to make their stay more comfortable. “Maybe it’s a warm blanket or a drink, if their doctor says it’s okay. I go in a talk to them and see if I can help,” Kit explained.

After many years as a successful Plattsburgh businessman, his civic and volunteer activities, it’s likely many of those Kit encounters are old friends or colleagues.  Kit was in business for 38 years, retiring in 1992.  He’s been a CVPH volunteer for 23 years but other community groups have benefited from his generous offering of time and energy.

“I’ve been volunteering for all of my adult life,” Kit reports. “I like to be involved in things and do things that are worthwhile. It’s fulfilling.”

A review of an abbreviated list of Kit’s involvements reveals a person dedicated to making his community better.  He served briefly on the CVPH Board of Directors, was an Alderman for the City of Plattsburgh and served as Clinton County Legislator. And in addition to donating time to the hospital, he’s volunteered for the cancer society and the Kent-Delord House.  He’s received the Rotarian’s Paul Harris Award for his effort in the group.

But it was his involvement with the Kent-Delord House that eventually led to this community’s signature event, the Battle of Plattsburgh Commemoration.  In 1997, Kit attended a meeting where the idea to develop such a celebration was discussed.  Soon, he was leading the charge to make it happen.  A few years later retired Beekmantown Social Studies Teacher Gary VanCour joined him as co-chair of the event. The result, of course, is an annual celebration filled with hundreds of reenactors, music, a parade and civic pride.

After 17 years at the helm, Kit and Gary stepped aside in 2015 however he and his wife Sally are still fairly involved in the event.   In 2014 he received the Liberty Award from the New York State Senate for his efforts to return Plattsburgh to the spotlight of national pride.

These days, he spends his time on endeavors that are bit more focused.  A gifted craftsman, Kit has gained a reputation for creating beautifully carved wooden birds.  He’s working with consignment shop in Florida – where he and his wife winter to sell some of his art. Other pieces have been donated to worthwhile charities like the Foundation of CVPH.  Gardening is another passion.  But once a week, he returns to the hustle and bustle of the Emergency Department to make a difference, one visit at a time.