on Friday, January 8, 2016 in Employees, EMT, Emergency Care by CVPH 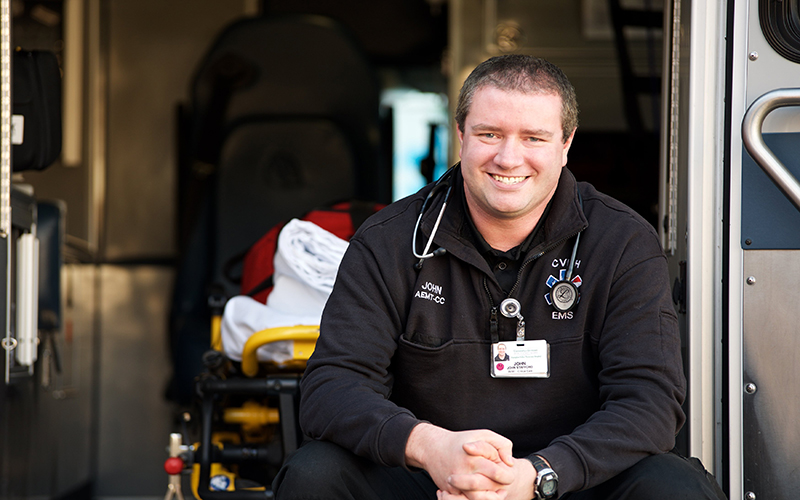 John Stafford is no stranger to assisting those in need. As a seasoned member of the CVPH ambulance crew, helping people is built into John’s job description. However, escorting World War II  veteran Rudolph “Rudy” Chapola on a North Country Honor Flight went above and beyond John’s call of duty.

John was at work the day Rudy arrived in the University of Vermont Health Network – Champlain Valley Physicians Hospital Emergency Department.  Rudy, who was 93 years old then, was transported there from his home in Champlain.

“I was getting an EKG set up for Rudy and his wife asked me if I would be his escort for the next Honor Flight. Just like that,” John explained.  Rudy was admitted to CVPH and that provided John the opportunity to visit the veteran every day.  “I got to know him,” John said with a smile.

The North Country Honor Flight is dedicated to providing WWII veterans like Rudy of Champlain with an opportunity to travel to our nation’s Capital.  Each veteran is required to have a guardian who can assist them during this very busy day of celebration, remembrance and travel.  Visits to the WWII memorial, the Korean War Memorial, Arlington Cemetery and the Tomb of the Unknown Solider are highlights of the Washington trip. Crowds of people sending them on their way and welcoming them home; police and fire escorts, high school bands and elementary school choirs are icing on the cake.

But for Rudy, it was a trip that almost didn’t happen. Rudy wanted to go on two previous flights, but various health concerns had made it impossible. Originally from Patterson, New Jersey, he served in the 7th Infantry 3rd Division – 805th Tank Destroyer Battalion “C” Company and the 27th Infantry Wolfhounds as a machine gunner and sharp shooter.

On the morning of the trip, the Master of Ceremony announced “Rudolph Chapola, US Army, Private First Class” and John helped his friend Rudy navigate his way to the bus that would bring him, other veterans and their guardians to the airport to begin their special day.   All were standing and clapping; many were saluting these treasured veterans.  It was a walk Rudy had waited many years to take.

“When we arrived in DC, we received a full escort, lights and sirens – the works, by the police, to the memorials.  It was a completely humbling experience to spend time with these men,” Johns said. “I’ll never forget the look on Rudy’s face as he stared out the window of the bus when we got to Arlington National Ceremony.  I am sure it brought back lots of memories for him.”

John’s natural ability to make connections with his patients is part of what makes him an effective and compassionate caregiver.  He’s been part of the Ambulance team for 12 years, is an ordained minister and is EMS Captain of the Peru Fire Department. Duty, honor and country are some values shared by both men.

Rudy has nothing but praise for the Honor Flight organization and for his new friend John.  “It was quite a send-off and John helped me get there. I waited 60 years for this and it was worth the wait.”

John checks in with Rudy regularly and offers assistance where and when he can. The two men met by chance, but have formed an unforgettable friendship.

“He is an American hero. They all are,” John said of the veterans who are honored by the local Honor Flight group. And to Rudy, John’s generosity and friendship makes him a hero, too.