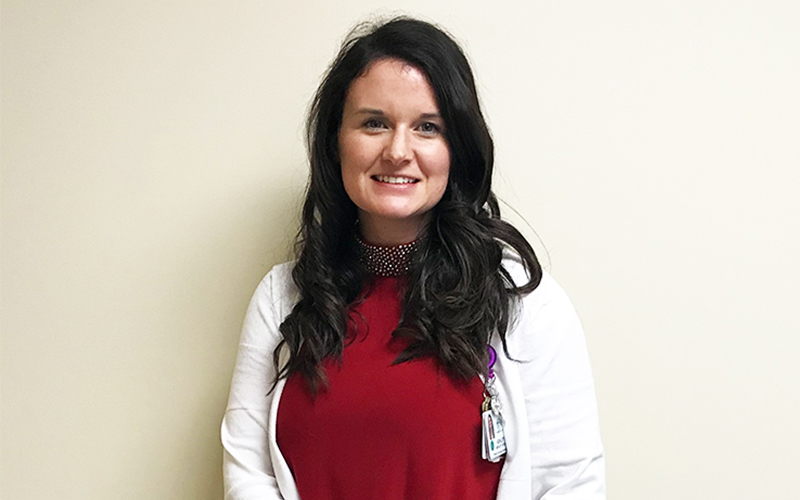 Ashley Doyle, RN Patient Advocate Manager recently received The Beryl Institute’s Ruth Ravich Patient Advocacy Award at the institute’s international conference held in Dallas, TX. The award recognizes individuals whose work supports the vision of bringing the patients’ needs to the center of healthcare. The Beryl Institute is the global community of practice dedicated to improving the patient experience through collaboration and shared knowledge.

And there she was. Alone, on a bench in the CVPH Lobby in the early morning grasping a single piece of paper. A hospital employee, on the way to a cup of coffee, stopped to ask if she needed help. Yes, she did. Fortunately she was quickly connected with Patient Advocate Manager Ashley Doyle who just happened to come in early that day.

“She appeared to be in shock and clung to that paper,” Ashley said. On it was an address.  The woman had written it down the night before as the State Police told her what had happened. They said they had found her husband in a wooded area about an hour North of their home. He had died by suicide. On the paper that she held so intently was the address. The police explained that he been removed from the site and had been taken to CVPH. She could see him the following day. So she drove to Plattsburgh, booked a hotel and came to the hospital at first light.

“She was obviously very upset. There was so much to process and so much to wrap her head around. We started slowly, with small steps. I simply asked, ‘What do you need?’”   Throughout the course of the day, Ashley and the woman formed a bond.  “I shared with her a saying I sometimes find helpful – ‘The sun will shine again’ – I wanted to let her know that while her life may never be the same, things could get better.”

As the new widow prepared to go home, she talked about returning to the site of her husband’s death because she needed to see where it happened – and to be where he had been one last time.  Knowing that the site was likely untouched since the body was discovered and viewing it in that condition could add to her trauma, Ashley made the hour-long trek the next day to prepare it for the woman’s visit. She first checked with the authorities to be sure it would not interfere with their work.

“I created a little memorial to him and brought some survivor of suicide loss ribbons to put on trees. I put a few inspirational signs around. One read, “The sun will shine again.”  I left his foot prints in the snow because I knew that would be important to her.”

“My job as a patient advocate is to take care of my patient – to do what he or she needs. And while technically, this woman was not my patient, she was not in our system, her husband was. I was doing what my patient would want. And I’m sure that would be to take care of his loved one.”

Ashley has been with the Patient & Family Experience Department for 2 years and worked at the bedside for 4 years before that. She said early on in her nursing career a mentor emphasized the importance of getting to know her patients including their family and support people. “Families and/or those who support the patient are part of the picture.  It’s how I approach my job. Caring for the family is part of what we do because it’s what best for our patients,” she explained.

“The survivors of suicide loss are subject to such trauma and making sure their needs are met is very important to their recovery,” she said.

When a person dies by suicide, many are affected. One study indicated that up to 115 people are impacted and 1 in 5 report that the experience dramatically disrupted their lives. Those who lose someone to suicide are at a higher risk for mental health issues, isolation and an increased risk of suicide. (Survivors of Suicide Loss Task Force. (2015, April). Responding to grief, trauma, and distress after a suicide: U.S. National Guidelines (p. 1). Washington, DC: National Action Alliance for Suicide Prevention. Retrieved from http://www.sprc.org/resources-programs/responding-grief-trauma-and-distress-after-suicide-us-national-guidelines )

In this relatively new role at CVPH, Ashley and her 4 colleagues have made significant contributions to the patient experience. Patient Advocate Managers are charged with supporting and promoting patient rights through communication and education. That can include helping patients and families navigate through the healthcare system, educating about health conditions and medications and grief support.  Doyle has been a member of the Patient and Family Experience Team since 2017. She holds a bachelor’s degree in psychology from SUNY Plattsburgh and a nursing degree from North Country Community College.

Patient Advocate Mangers support our not only our patients and their families but our staff. They are able to spend additional time with patients to be sure their experience meets their expectations in many cases, exceeds them.

A Survivors of Suicide Loss Grief Support group meets the second Monday of each month at the Newman Center, 90 Broad St., beginning at 5:30 pm. Facilitated by a   mental health professional, the group provides a safe, confidential setting for grieving, healing and moving forward. It’s free and open to anyone who has experienced a suicide loss. For more information, call Mary Anne at (518) 563-1141 or email at survivorconference@gmail.com.