Theresa makes a difference every day. 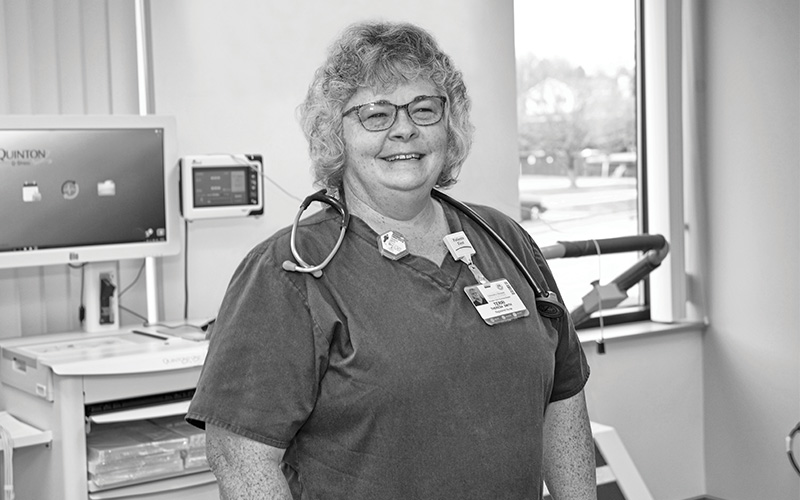 Expect the unexpected. It’s the unwritten rule of healthcare. Just ask Theresa Smith, RN, a 31 year nursing veteran who began her shift in Cardiac Rehab expecting to supervise patients as they build stronger hearts but ended up taking care of Rachel, a dog whose owner needed to go the Emergency Department.

The patient, a Vietnam veteran, had been in Cardiac Rehab for a few sessions so the morning route was familiar to him. “Our patient came in for his rehab and like always we put him on a monitor.   Fairly quickly, the monitor indicated that he was having arrhythmia (irregular heart rate),” explained Theresa who added that certain arrhythmias, like atrial fibrillation can lead to stroke and other life threatening conditions if left untreated. “I knew he needed treatment right away.

When she explained to the patient that he needed to immediate care in the ED, he refused to go.  “He told me, as he was pulling off the EKG wires, he couldn’t go to the ED because there would be no one to watch his dog, Rachel.”

“So I said, I’ll take your dog.”  Theresa admits that she volunteered to take Rachael without truly considering the implications of her decision. Caring for Rachael would mean that for the rest of the day, she really could not stay at work.  “But everyone in Rehab was totally supportive,” she said.   It was the right thing to do for the patient.

Rachael, as it turned out, was in the man’s car – expecting to wait for only an hour or so that day for her human to return.  “Once he was in the ED and settled, I went to the car to get Rachel.”  With the ED team’s permission, Theresa brought the pooch in to the department to visit.  Theresa and her new friend spent part of the day of the hospital campus and when it became clear that the patient was going to be admitted to the hospital for treatment, she and her patient decided it was best to bring Rachael to Theresa’s home.

“She fit right in and seemed very relaxed,” Theresa said of her house guest.  Rachael joined Theresa’s brood of beloved pets, 4 dogs, 2 sheep and 30 chickens that day.  “She was just so sweet.”

Our Accredited Cardiac Rehabilitation Program is a 12 week medically supervised program that incorporates progressive exercise and education, including dietary and lifestyle counseling to help patients after a cardiovascular event.  The cardiac rehab team often forms close bonds with their patients. “They really do become like family and I think there was an extra bond because of our military connection.”  Theresa grew up in a military a family and still holds fond memories and great respect for the men and women in uniform.

“When this man said he wouldn’t get the help he needed because he was worried about his dog, it was a no-brainer. Of course I would care for her – as long as needed. I was just glad to help.”