Ride to Remember is Annual Tribute to Administrator's Mom

on Tuesday, July 2, 2019 in Employees, Family Medicine, Residency by CVPH 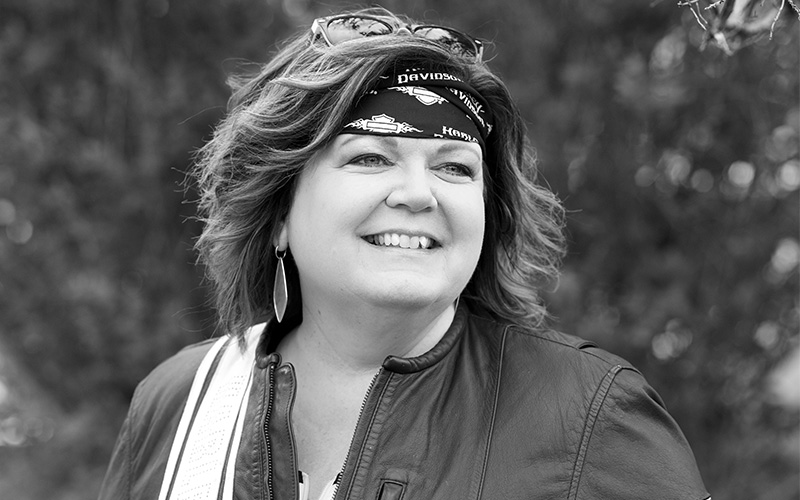 Each year, Kathleen Freeman, along with her husband Pat and as many as 150 other local bikers make their way along the winding roads of the Adirondacks. The route is different each year but it sometimes takes the bikers past a little white house with a sprawling back yard to pay homage to the late Barbara Tobin, Freeman’s mom. Her mom is the catalyst behind the Ride to Remember, an annual fundraiser to benefit the Third Age Adult Day Center, which provides services to those with Alzheimer's Disease and other dementias.

Kathleen and her family along with a dedicated group of “amazing” friends have raised an average of $15,000 each year for the past 13 years for the local organization. The 14th annual Ride to Remember will be held on Saturday, July 13 and they hope their 14-year total will hit the $200,000.00 mark. The group’s generous donations and community support have allowed the Third Age program to purchase a small bus that transports clients to the Third Age Adult Day Center. The Third Age Adult Day Center program is part of the Center for Neurobehavioral Health programs and services.  Third Age is a specialized program for people with dementia or memory loss related to Alzheimer’s Disease. Participants are able to socialize and receive assistance with activities of daily living in a safe and supportive environment while providing caregivers a bit of respite. Maris Liberty, Director of the Third Age program, said that participants take part in a variety of activities that are held at program center. The most popular groups are yoga, live music and religious services.

The bus, which proudly displays Ride To Remember’s logo, offers families who want their loved one to remain at home as long as possible much needed support. It’s one of three, according to Maris.  “We put a lot of miles on our vans and buses, transporting our clients to and from the center.”  she said and added that nearly 90% of the folks who benefit from Third Age use the transportation.

Kathleen, who is the CVPH Family Medicine Residency Administrator, has spent her career in health care so taking care of others is second nature. She initially trained as a radiologic technologist and then earned a certification in cardiac sonography while working in CVPH’s first Echocardiography Lab. She then moved on to work in the private office setting, and started several echo labs in Vermont and New York State.  Her path led her back to Plattsburgh where she served as the director of Valcour Imaging and then manager for Associates in Radiology before becoming the Family Medicine Residency’s first administrator.  And although event planner and fundraiser have never been part of her resume, she was pretty sure organizing a charity ride was something she could handle. “As bikers, we (she and her husband) had participated in a lot of benefit rides. I thought, ‘I can do this,’ ”  Kathleen recalled.

Today she’s quick to point out that the event would not be as successful if it were not for the hard work of the dedicated team of friends and family who lend a helping hand year after year.  “Everyone has a role and they just do it,” she explained. “The Ride wouldn’t happen without them.”

Kathleen is one of seven born to Mrs. Tobin and her husband Frank. She was raised in the white house along the Saranac River where the frequent family gathering were filled with lots Irish humor and love. Barbara was a stay at home mom while Frank worked as foreman for the New York State Department of Transportation. “When we were all older, mom had a few jobs out of the house, mainly to stay busy,” Kathleen explained. Family, however, was always a priority.

It was after the death of her husband that the family began to notice some changes in Barbara. Kathleen said at first her mom was just forgetful but slowly, it became clear that there was more of an issue. “Mom’s forgetfulness slowly progressed until completing basic tasks became difficult,” she explained.  Mrs. Tobin was diagnosed with dementia and the family did what they could for as long as they could to support her and keep her home.  “My sister and her husband moved in with her for a while but when it was time, we made the difficult decision to place her in a nursing home,” Kathleen explained. “Mom was in her 70s at the time and didn’t look like she belonged there but it was the best place for her.  Although it was a heartbreaking decision for us, she never wanted us to be the ones to take care of her, and she quickly adapted to the nursing home environment.”

Barbara  lived with the disease for several years and her family watched as it stripped her of everything that was “her.”  It’s a scenario experienced by families everywhere.  “I think people support our ride in part because almost everyone is touched by this disease.”

It was during an Alzheimer’s Walk that the idea of a benefit ride came to Kathleen. “Bikers are generous people.  We don’t need a reason to ride, but if there is a cause, it makes it all the sweeter, "she said.  So each year in early July, bikers leave the American Legion Post 1619 in the morning for a ride through the Adirondacks sometimes riding past the house by the river as part of their journey. Upon their return, the bikers and everyone else who wants to support the event (no motorcycle needed) are treated to a BBQ, music and an auction. It’s a labor of love that showcases Kathleen’s commitment to helping others, the community spirit shared by her fellow bikers and the strong family ties that began in that white house along the Saranac River.