PLATTSBURGH, NY (04/30/2019) – Kiesha Holmes, RN of the University of Vermont Health Network – Champlain Valley Physicians Hospital’s (CVPH) Intensive Care Unit (ICU) was honored with The DAISY Award for Extraordinary Nurses ® on Thursday, April 11.  Holmes was nominated by the family of an ICU patient who had made the selfless decision to become an organ donor.

In nominating Holmes, the family wrote, “This nurse was so kind, caring, respectful, and considerate. They continued to care for Meghan and our entire family as we dealt with the terrible news of her brain death. They helped us honor her wishes to be an organ donor and stayed with her every step of the way.”

Holmes made it possible for the Meghan’s mother to fix her daughter’s hair one last time. “(it was) an unforgettable moment and such a caring act.”   Dignity and respect were words used throughout the nomination letter to describe how Holmes interacted with the patient and her family.  “She was kind and considerate to our wishes and always had respect and honor for Meghan. It was always apparent through their care that Meghan was top priority and her dignity was held to highest regards. We are all so incredibly grateful for this nurse’s support and care.”

CVPH Chief Nursing Officer Carrie Howard Canning called Holmes an extraordinary nurse and said she was a “wonderful example” of the impact nurses have on patients and their families. “Kiesha made such a meaningful difference in this family’s last days with their loved one. That’s a tremendous gift.”

Holmes, who has been part of the ICU team for 2 years, was honored at a surprise ceremony that included her colleagues, members of the CVPH executive team and members of Meghan’s family. Every DAISY recipient receives a certificate commending her or him as an "Extraordinary Nurse."  The certificate reads: "In deep appreciation of all you do, who you are, and the incredibly meaningful difference you make in the lives of so many people."  Honorees also receive a DAISY Award pin and a beautiful and meaningful sculpture called A Healer’s Touch, hand-carved by artists of the Shona Tribe in Zimbabwe.

As a tribute to Meghan’s remarkable gift, an Honor Walk held at CVPH and staff lined the hallway between the ICU and the operating room to honor the woman who saved three lives that day because of her decision to become an organ donor.  As requested by Meghan's family, a video was created to share her story, honor her selfless gift and raise awareness about organ donation.  The video can be viewed on YouTube: https://www.youtube.com/watch?v=L8qYwdgtq_4&t=33s

CVPH launched the DAISY Award for Extraordinary Nurses in early 2018 as way to recognize and reward licensed nurses for making a meaningful difference in the lives of their patients. Nomination forms and boxes are located at each of the hospital’s main entrances and online at UVMHealth.org/CVPHDaisy. Nurses may be nominated by patients, families, and colleagues.  A committee reviews nominations and each quarter, awards the honor to a deserving nurse.

The award is part of the DAISY Foundation’s mission to recognize the extraordinary, compassionate nursing care they provide patients and families every day. The DAISY Foundation is a national not-for-profit organization, established in memory of J. Patrick Barnes, by members of his family.  Patrick died at the age of 33 in late 1999 from complications of idiopathic thrombocytopenic purpura (ITP), a little known but not uncommon auto-immune disease. (DAISY is an acronym for Diseases Attacking the Immune System.)  The care Patrick and his family received from nurses while he was ill inspired this unique means of thanking nurses for making a profound difference in the lives of their patients and patient families. More information is available at http://DAISYfoundation.org. 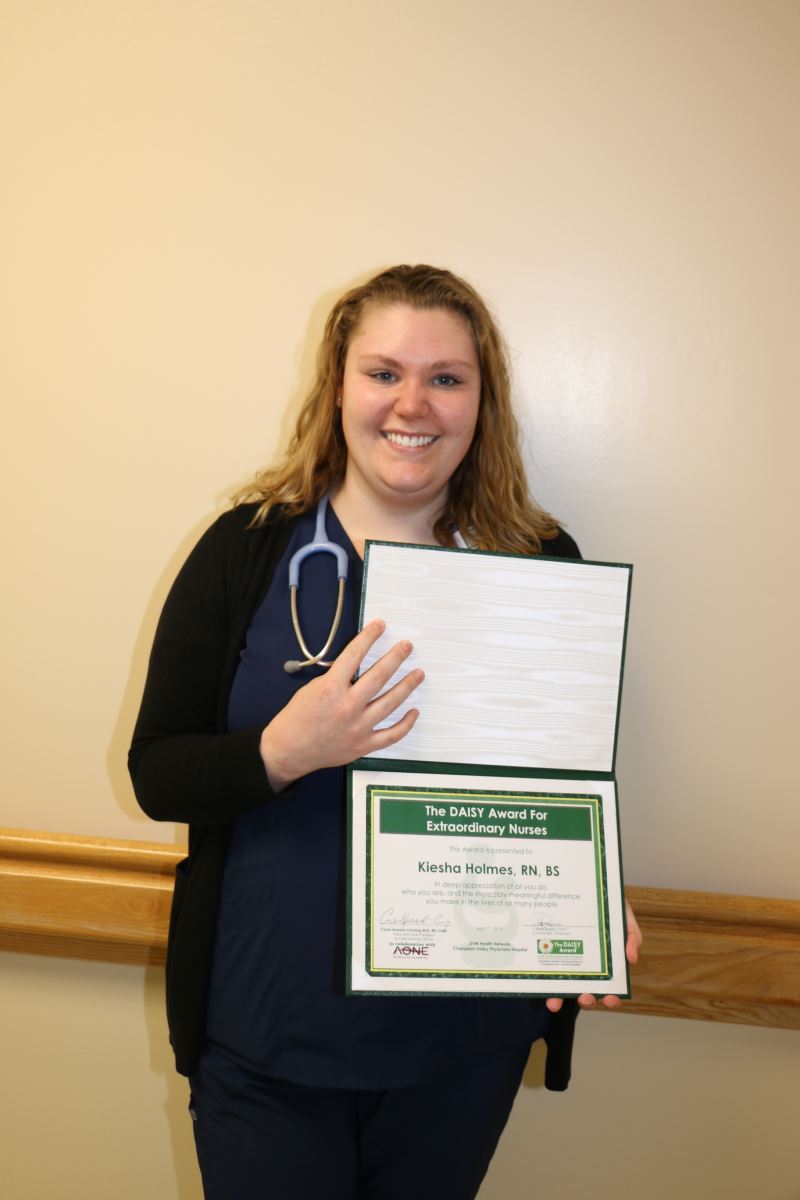 CAPTIONS:
Kiesha Holmes, RN, BS, was honored earlier this month with the DAISY Award at the University of Vermont Health Network – Champlain Valley Physicians Hospital. The award, based on nominations from patients, families and coworkers, is given quarterly to CVPH licensed nurses who have made a meaningful difference in the lives of their patients. The DAISY Award for Extraordinary Nurses is part of the DAISY Foundation mission to recognize nurses nationwide for their compassion, expertise and caring. 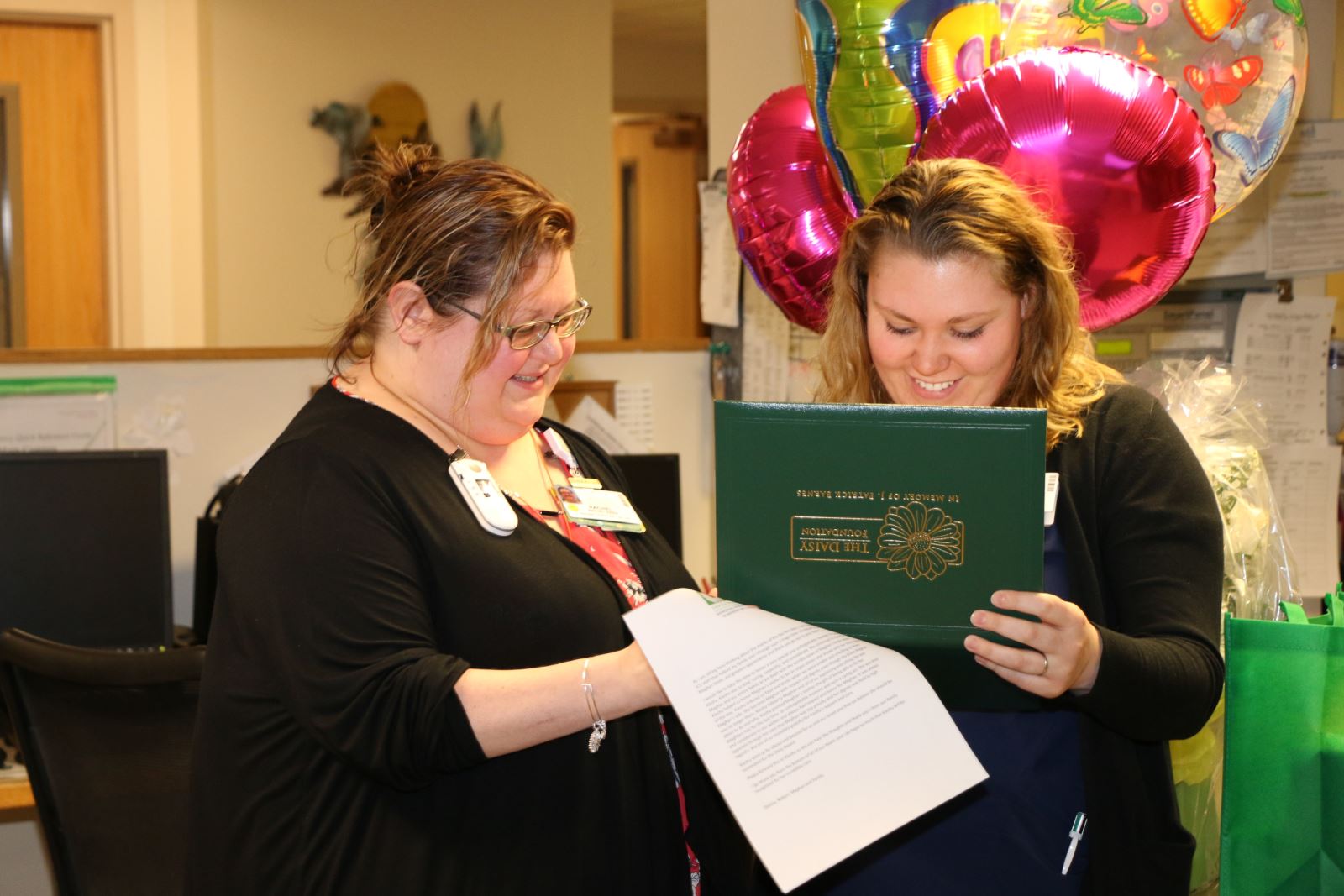 Rachael Kern, RN, left, of the University of Vermont Health Network – Champlain Valley Physicians Hospital DAISY Award Committee, presents Kiesha Holmes, RN, BS of the CVPH’ Intensive Care Unit with a certificate from the National DAISY Foundation. Holmes was honored earlier this month with the DAISY Award given to CVPH licensed nurses who have made a meaningful difference in the lives of their patients.  Nomination forms and boxes are located at each of the hospital’s main entrances and online at UVMHealth.org/CVPHDaisy. Nurses may be nominated by patients, families, and colleagues.  The DAISY Award committee reviews nominations and presents the award each quarter

About The University of Vermont Health Network

The University of Vermont Health Network is an academic health system that is comprised of six affiliate hospitals, a multi-specialty medical group, and a home health agency. We serve the residents of Vermont and northern New York with a shared mission: working together, we improve people’s lives.  Our partners include:

Our 4,000 health care professionals are driven to provide high-quality, cost-efficient care as close to home as possible. Strengthened by our academic connection to the University of Vermont, each of our hospitals remains committed to its local community by providing compassionate, personal care shaped by the latest medical advances and delivered by highly skilled experts.